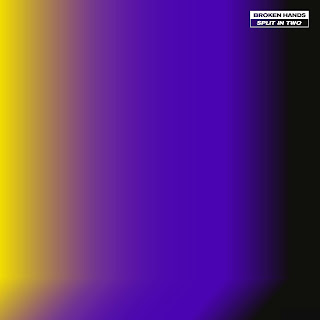 Canterbury rockers Broken Hands are a band who use their influences and infuse them with style, and here on ‘Split In Two’ they have created an album which indulges in bursts of pure rock 'n' roll, grunge, and a few more jubilant poppier moments.

This shift is one which works tremendously well too on this Julian Emery (Nothing But Thieves, Lissie)-produced record, with the pop-rock essence of songs such as ‘Mess’ and ‘Run Away’ acting as a mesh between old school rock 'n' roll and modern British indie.

Opener ‘Can You Feel It’ introduces the album with a slick grungy groove and swagger, as well as the previously releases singles ‘Friends House’, and the loud and heavy banger ‘Wrong Track’, which offer a further taste of the dramatic fuzzy anthems and razor-sharp lyricism to be found throughout.

The record was inspired largely by the band’s life on the road, particularly in the US, and that Americana influence has rubbed on tracks like 'Run Away', infused with indie-pop sensibilities, catchy chorus and an ambient Americana groove. The same is to be heard on the album standout, the anthemic guitar ballad ‘For The Night’. The big tune carries some excellent guitar work and power-packed emotive vocals. Making its mark on an album filled with high tempo tracks, its depth comes from frontman Dale Norton's experience of “being separated from loved ones during lengthy tours, which to be honest is exactly how I've felt during lockdown as me and my partner have had to live separately."

Overall, this second album is a good body of work with a number of positive moments. However, it is overshadowed by one fantastic song. If Broken Hands aim to take their music in the direction of ‘For The Night’ in the future, I’m sure it would be a change nobody would be complaining about.