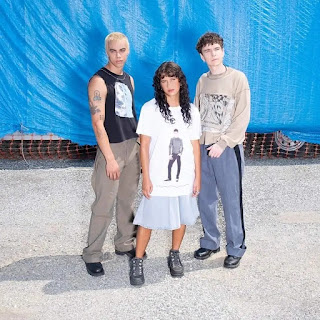 New York dance/synth-pop trio Couch Prints - Jayanna Roberts, Brandon Tong, and Jacob Truax - build up to the release of their debut EP ‘Tell U’, out October 30 via House Arrest, with the video to the record's title track.

“I wrote the first iteration of this track while living in Denver - I was working this job I hated and had this feeling that life was speeding by,” says Tong. “I ended up moving to New York a few months later, and shortly after Jake came out from Paris to record some of the music we’d been collaborating on the past year. While he was [In Paris] he had worked on music with Jayanna, so he called her to come sing on the tracks. We showed her the tracks and immediately she was humming along and had this incredible tone and way of singing, so we started recording for ‘Tell U’ and finished it that night.

"With so many moving pieces coming together so serendipitously, the final song came to celebrate this feeling of transience and movement and leaving the past behind. When we gave the song to Mayachka for the music video, she took that wistful feeling and our experiences, and created a story about a supposed three-way love triangle between us - with all the romance and nostalgia of a 2000’s soap opera. It perfectly captured the melancholy and strangeness of our first year coming together.”

Check out the video below, directed by Mayachka and filmed in NYC's oldest home, the Lent-Riker-Smith property.