Track Of The Day :: ‘Can I Speak To A Manager?’ request The Clockworks 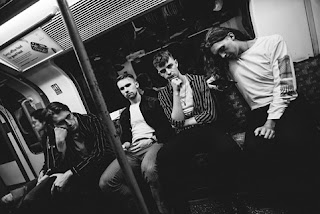 Irish art-punks The Clockworks spew out a raft of bombastic riffs and pneumatic rhythms on ‘Can I Speak To Manager?’

Released on August 14 via Alan McGee’s Creation 23 label, the now London-based four-piece serve up a biting and incisive cut of agitated alt-rock on this self-produced new offering, which follows on from 'The Future Is Not What It Was'.

Recorded by Paul Tipler at Unit 13 Studios in London, the track was written in 2018 while the band were still living in their hometown of Galway. Frontman James McGregor found himself taking refuge from the drudgery of his 9-5 in a number of cafés and pubs during his lunch break. Infuriated by the plastic world around him, he allowed his pent-up rage to spill out into a bile spattered monologue that spirals out of control and ignited by the purchase of a faulty laptop.

“Musically I think it is one of the starkest and darkest tracks that we have," says McGregor. “In essence it’s a simple story of getting a dodgy laptop and having no luck on the phone to the company who sold it. Without the 'fast-food distraction' factor I hoped the laptop would provide, I looked around for something else to do and found nothing. Nothing on TV, nothing in the fridge, showering for some purpose…. Spending money to try and buy some purpose just makes me more cynical... I wanted to sort of drill in the phrase 'Can I speak to a manager?' to get a feeling that everywhere I look, that question is there.”