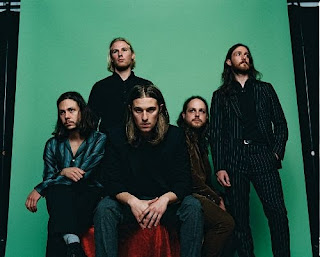 Ahead of the release of their second album 'Split In Two', now pushed back to an August 21 drop, Broken Hands have shared a new track from the record, ‘Run Away’.

The indie rock anthem comes with  pop sensibilities, and as singer Dale Norton comments, “’Run Away’ is the song that we stretch out live the most, the end of the track gets really ambient but has an Americana vibe somehow! This is the perfect recipe for a long wig-out."

Fans who pre-order the band's album will be granted access to an exclusive livestream performance where the band will play the new album in it’s entirety. Although originally intended for the day before release, it will still go ahead tonight, August 6.

Tickets for the livestream are available via Dice here. All proceeds will go towards supporting local venues.

"This live show experience is something we've wanted to have a crack at for ages!" Norton says. "It will take place in our hometown Faversham at the independent Arden Theatre. We are filming it in collaboration with our good friend Chris Wade (DogBrain Video Productions). We really want this to be a HD peek of the band playing new material for the first time, and to be honest we won’t ever play this album in its entirety again!"