Marika Hackman unveils cover of Elliott Smith's ‘Between The Bars’ 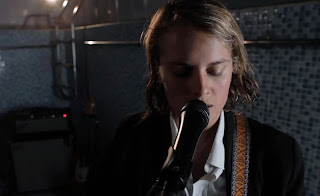 Last month she released her self-produced ‘Covers’ album, Marika Hackman now releases her beautiful cover of Elliott Smith’s classic ‘Between the Bars’ performed on the night and filmed by Stolen Sessions in an abandoned swimming pool.

“Out of everything on this record, I kept ‘Between the Bars’ closest to the original,” she says. “On the ‘Any Human Friend’ tours in 2019, I started playing it in the set - I hope you like this version from the livestream. I just wanted to do a really good performance of it, more like an homage than a cover.”