Anorak Patch Sing & Tell on friends, influences and getting 'Irate'! 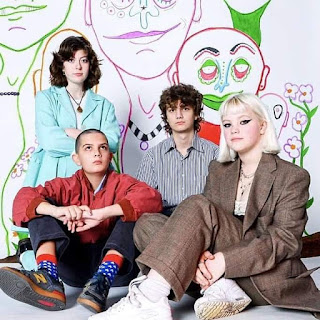 Newly signed to Nice Swan Records, Colchester four-piece Anorak Patch are not just getting people talking due to their tender years - 14-year-old drummer, with a triumvirate of 16-year-olds - but also with visceral just released third single ‘Irate’.

I'm Eleanor Helliwell and I play bass in Anorak Patch. Then there's Luca Ryland who plays drums and sings; Effie Lawrence on keyboards and sings too, and Oscar ryland on guitar.

We’ve been a band for nearly two years; we knew each other before the band was formed through going to gigs together and being at the same school in Essex. We’d go to gigs almost every week and it seemed only fitting that we start a band ourselves.

Our music, although very broad, is influenced by bands like Squid and Talking Heads. It fuses all our different favourite types of music.

We write our songs at Pioneer Studios in Colchester. Oscar and Luca often come up with an idea and Effie and I critique it. We all contribute to the writing process in our own ways.

'Irate' was written during the first lockdown. It’s about how we felt at that time and how frustrated we were about not being able to play gigs and record, and everything else you have to do as a band. We recorded it with Tom Donavon in Rowhedge and the song really came together well.

We should be back playing gigs and hopefully releasing more new music for everyone!