The Horrors are back with brand new single 'Lout' 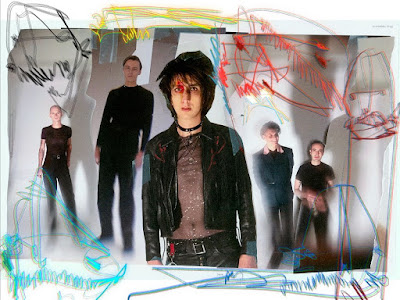 The Horrors make their long-awaited return with their first new music in nearly four years, since their 2017 album ‘V'.

Unveiled today, new single ‘Lout’ is the industrial-edged title cut of a three-track EP due for release on March 12 via Wolf Tone/Virgin Music Label & Artist Services. The EP tracks ‘Lout’ and ‘Orb’ will also be released on blood red 7” vinyl, strictly limited to 1500 copies worldwide.

“Lout is about the relationship between choice and chance, compulsive risk-taking and pushing your luck," singer Faris Badwan explains. "As a band, particularly live, we’ve always had an aggressive side and as we began writing new songs it became clear that we were heading in that direction.”

“There’s something about it which feels like a return to a heavier sound but really it’s a million miles away from anything we’ve done," says keyboardist Tom Furse, on 'Lout's bold departure from the previous Horrors sound. "Keeping the sound aggressive and the beats heavy was a central tenet, everything seemed to fall around that.”

The release comes with a striking visual aesthetic carried across the artwork, visuals and an upcoming merch collection born from exciting collaborations between the band and a new creative team led by Bunny Kinney, including a short film directed by Jordan Hemingway starring beauty executive Isamaya Ffrench and scored by guitarist Joshua Third and Furse, as well as press shots by Loverboy designer Charles Jeffrey.