Track Of The Day :: DEADLETTER - Fit For Work 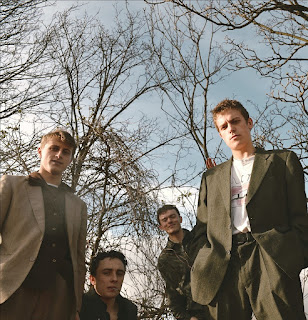 Sharp and angsty, South London-based, Yorkshire-spawned DEADLETTER channel the droll fury of The Fall and the lopsided rhythm of Gang of Four into a post-punk mayhem as they strike a broadside on the Department for Work and Pensions.

Second single 'Fit For Work', out today (September 9), is an arch follow-up to their May debut single, 'Good Old Days". Providing an acute, angered study into bureaucracy, and loss of personal identity, 'Fit For Work' is a statement of intent from the band, as the much derided three words have become synonymous with many of society's ill and disabled being declared so erroneously, often with fatal consequences.

"'Fit For Work' was a concept a long time before it was a song," says frontman Zac Woolley. "As a band, and as a writer, we [I] have always regarded the call and response strategy as biblical. The idea of having a conversation during the delivery of art leads to this absurd metaphysical tangent of acknowledging your art is art whilst performing it; similar to when artists use the line 'I wrote this song for you because…'. What they are doing, when you think about it, is taking away the idea that what they’re creating exists in itself, and is in fact an entity that exists in a wholly real world."