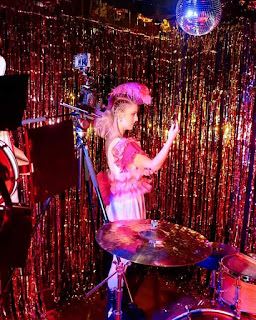 'Breathe' is the first single from Thyla's debut album due later this year.

“‘Breathe’ was written in the early hours of the morning,” says the Brighton-based quartet's singer Millie Duthie. “Eventually we chanced upon this really vibey atmospheric lick that you hear in the intro, and the whole song grew from there. The song blossomed into a slightly melancholic dream-pop bop, it’s bittersweet and has a slightly inconclusive feeling to it; imagine a film where the main character never actually gets the happy ending you’ve been so long yearning for.

"The result of how the instrumental sounded no doubt manifested lyrics that held the same sentiment. The song is about loneliness, estrangement from family and close friends, yet despite this, feeling a sense of inner strength about the situation. It’s like recovering from a breakup and realising you’ve come out stronger, but a reflection of the scar tissue that resulted from the trauma.”

Watch the video, directed by Joseph Daly, below.