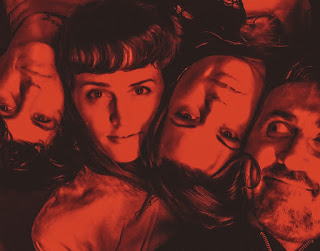 With the full 7" out on September 11 via Flightless Records, Melbourne's Tropical Fuck Storm have shared the sprawling six-minute 'Legal Ghost'.

Following last year's full-length 'Braindrops', and 'Suburbiopia' in March, frontman Gareth Liddiard has
unearthed early tracks from his Bong Odyssey project with Rui Pereira, recorded back in the 90s on four-track tape, and reworked them; one of which was titled 'Legal Ghost'.

“This is the first song I ever wrote that I thought was a decent song,” he says. “Everything before it was just a big tantrum, but this song had a touch of class. When I was putting the Bong Odyssey record together again last year, I heard it and thought it was something that could work well with TFS. The original was really cool, but it still sounded more like a sketch of a song and wasn’t quite fully realised, so I took the song to TFS and we fleshed it out a bit.”